Do smart bulbs give off heat? This is one of the bugging questions in the mind of anyone interested in getting a smart bulb. And rightfully so. Of course, you would want to know what comes with the smart bulb package. From my experience with smart bulbs, I plan to answer any questions you may have concerning this hot topic.

To begin with, let’s do a quick one into the modus operandi of a smart bulb.

A smart/LED (Light Emitting Diode) bulb is a semi-conductor containing photons (a part of the electron) that light up when electrical energy is made to flow through a microchip in the bulb. The low energy threshold of the photon ensures that significantly lower energy than that required in incandescent bulbs is required to light up the smart bulb.

They are bulbs which by virtue of their efficiency of operation, minimize energy uptake and maximize utility. They are therefore the intelligent choice for you as you move towards creating a smart, energy-saving home.

Now, to the question in the debate.

Do Smart Bulbs Give Off Heat?

A popular myth is that smart bulbs do not get hot. In a sense, this is true. LEDs are cool-to-touch because they generally don’t generate heat in the form of infrared (IR) radiation (except where they are IR LEDs).

IR radiation heats up the casings and surroundings of incandescent bulbs, making them hot to the touch. The absence of IR radiation in LED fixtures, therefore, allows them to be applied to heat-sensitive situations e.g. illuminating food or textiles.

However, unlike some marketing have projected, LED bulbs generate heat much like anything that consumes electricity.

Heat is generated within the LED device, due to the lapses of the semiconductor processes that produce light. The wall-plug efficiency (calculated as optical power out divided by electrical power in) of LED packages is usually around 5-40%, implying that somewhat between 60 and 95% of the power supplied is lost as heat.

However, worthy of note is that energy consumption in LED bulbs is a lot less than in incandescent or halogen bulbs and that they are much more efficient at using this energy compared to traditional bulb types.

In essence, while LEDs will generate heat, this will only be a small fraction of the heat generated by a traditional bulb.

LEDs have several components that work to reduce high voltage as they are very heat sensitive. Also, there are several factors that work together to determine the heat dynamics in a smart bulb. These factors, if ignored, can the reason for the shortened lifespan of your LED bulb.

As a prospective smart bulb owner, you should know these factors and how you can work with them get the best out of your LED bulb.

Let’s go through them. 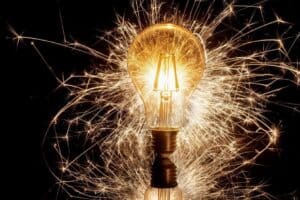 Putting your light bulbs in volatile environments is bound to shorten their lifespan. A bulb that should have served you for a decade ends up deteriorating after only a couple of years.

Tip: Shelter external lights with a glass enclosure to protect them from harsh weather. Also, keep the LED bulbs inside the house away from heat sources such as boilers/heaters and furnaces.

When LED bulbs are enclosed, the heat they generate tends to build up. This heat if not properly transferred will lead to an overheated light bulb with a shorter lifespan. Heat sinks are materials attached to LED bulbs that aid in conducting heat away from the bulb. The quality of the heat sink used goes a long way in determining how hot the LED bulb gets and hence, how long it lasts.

Some of the features of a good heat sink material include:

LED bulbs are highly temperature-sensitive. As they heat up during use, their electrical properties may change leading to a greater pull on current. This causes the LED’s brightness to fluctuate and overheat internally, shortening the bulb’s lifespan. This is also the case with variations in voltage supply.

Tip: To fix these intricacies, many products come with a constant current driver, and if yours doesn’t, you should get one. You can afterward, attach a constant DC voltage supply for use in the operation of such bulbs.

What is Affected When a Smart Bulb Gets Hot?

The aspects of a LED bulb that are affected the most by overheating include:

Lumen maintenance measures the amount of light produced by a source when it is brand new and compares it with its light output at a specific time in the future.

Like every other light source, LEDs slowly lose their light output over time. This event is called lumen depreciation. In LEDs, lumen depreciation results when the heat is generated at the LED’s positive/negative junction, which is why LED bulbs often include a heat sink to keep the unit cool and to prolong its life.

Apart from lifespan and performance, temperature also affects the color of the white light (color temperature). Materials with poor quality or defective design can change when exposed to high temperatures, such that the white light of the LED becomes almost blue, permanently.

In extreme cases overheating LEDs can cause physical damage to the LEDs themselves including components such as plastic lenses, printed circuit boards, wires, connectors, etc.

The statement that LED bulbs do not get hot is only a half-truth. Unlike incandescent bulbs, LED bulbs do not emit IR rays, which makes them cool-to-touch. A LED bulb, however, like every other device that uses electricity, gets hot with use due to lapses in the semi-conductor processes that produce light. This build-up of internal heat, if not properly evacuated can lead to an overheated bulb with a shortened lifespan. With the helpful tips offered by this post, however, you’ll be able to better operate your LED bulbs for maximum performance.

Finally, we’ve put together some extra info you should put into consideration before getting that smart bulb.

1. How long should my smart bulb(s) last?

The industry standard for smart bulbs is that they should continue for at least 25,000 hours with at least 70 percent as much brightness as they had when they were new. Under 70 percent is the point at which the industry has established that the decrease in brightness is noticeable. The lifespan of the bulb is also dependent on how often it is used. The industry estimates are based on 3 – 4 hours of usage per day. When used consistently, the lifespan decreases considerably and they stay within the 70 percent range for less than 3 years. The warranty on most LED bulbs is therefore placed at 3 years.

2. How can I preserve my smart bulb(s) for longer?

Preserving your LED bulbs for longer will entail that you:

3. Are smart bulbs an economic option?

According to a report published by Viribright, factoring both the cost of the bulb and the cost of electricity, the results for a 60-watt incandescent bulb, compared to its equivalent in LED and CFL, used over the course of 20 years, you’ll see, are very different:

This implies that although the purchase cost of LEDs is higher than regular bulbs, they’re much cheaper to use – and are cheaper than their CFL counterparts as well.

4. How hot does an incandescent light bulb get?

Light bulbs get quite hot. A standard incandescent light bulb may reach temperatures of up to 100 degrees Fahrenheit (38 degrees Celsius), which is too hot to handle!

Because this heat is generated by the filament inside the light bulb, it is critical to handle light bulbs with care. When a bare incandescent bulb breaks, the glass shards and hot filament can burn you or set items on fire!

5. Do smart bulbs burn out?

Smart bulbs eventually fail to function. They may burn out as a result of age or use. In general, smart lights should survive between 15 and 25 years, or 15,000 to 25,000 hours.

This is substantially longer when compared to a standard bulb without led technology or smart capability.

I am a tech enthusiast. Since the Smart Home tech came out I fell in love with it and have been following it ever since. I decided to use this platform to pour out my knowledge and experience I've had overtime to guide your decisions. Hope the experience is worth your while.

link to How Do You Secure a Detached Garage?

If your garage is detached and a bit disconnected from your home, you've probably gotten a bit worried and security-conscious about it a couple of times. Your cars and other valuable items are...

Organizing your garage makes it super easy for you to find things in your garage.  Do you have a small budget with a big dream? Hang on, let's show you how to beautifully organize your garage...

Think becoming a DIY Smart home expert takes forever? Well, you’re about to get there at the speed of smart. Enjoy the rich store of Device Hacks, Gadget Reviews, and Installation Guides on the latest innovations and best gadgets for your home. With our insightful and helpful articles on commonly encountered problems and questions concerning smart devices, your smart home experience is set to be upgraded with trustedsmarthomes.com. These articles will make you a smarter, more efficient Homeowner and Guide your shopping for products for maximum productivity

This site is owned and operated by Dare Bear Digital LLC. Trustedsmarthomes.com is a participant in the Amazon Services LLC Associates Program, an affiliate advertising program designed to provide a means for sites to earn advertising fees by advertising and linking to Amazon.com. This site also participates in other affiliate programs and is compensated for referring traffic and business to these companies.